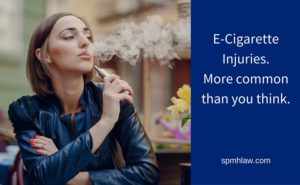 Many smokers switched to electronic cigarettes between 2007 and 2016 because the products seemed like a healthier alternative that could help them cut back or quit. Today, approximately 30 million adults and 2.4 million teens use e-cigs regularly. Each year, consumers sustain severe injuries due to exploding batteries and exposure to e-cigarette liquid that contains toxins and high levels of nicotine.

For several years after e-cigs hit the mainstream, there were few laws restricting the sale and use of these devices. Furthermore, their safety wasn’t adequately researched. Today, there’s growing concern about second-hand e-cig emissions. Multiple studies have found that the vapor contains formaldehyde and other carcinogenic chemicals, including benzene, acetaldehyde and tobacco nitrosamines.

According to the Centers for Disease Control and Prevention, there’s been a dramatic increase in poison control calls related to e-cig liquid. Between late 2010 and early 2014, calls went from one per month to 215 per month. Half of these incidents involved children under 5, but 42 percent involved adults over age 20. Nicotine poisoning caused by e-cigs can occur from ingesting, inhaling or touching the liquid.

Children are more likely to drink the e-liquid. Experts say that the containers are not childproof and that children are attracted to e-liquids flavored like fruit or candy. Some flavored products contain diacetyl, the compound that causes popcorn lung when inhaled.

Poisoning caused by inhalation represented one-sixth of the reports. Absorption through contact with the skin or eyes can also cause adverse reactions. Nausea, vomiting and eye irritation are the most common symptoms. Acute poisoning can cause seizures, respiratory depression or death.

An e-cigarette can cost as little as $30 or more than $300. Some users build homemade devices or customize store-bought options. Each e-cig contains a mouthpiece, an atomizer/heat element, a refillable e-liquid tank or cartridge and a battery. The batteries are made from lithium-ion polymers. This is the same material used in batteries for cell phones, laptops and cameras. Electrolytes in lithium-ion batteries are either flammable or combustible. When the material overheats, it can ignite or explode.

Because the tip of the housing is the weakest point, an e-cig can be propelled across a room during an explosion. The U.S. Fire Administration (USFA) compared that to a bullet or a flaming rocket. In some cases, the device will break apart into shrapnel-like shards.

In its comprehensive report, the USFA found that 80 percent of explosions occur while the device is charging. Slightly more than half of e-cig fires are minor, but one-third of the fires have a moderate spread.

E-cig explosions are even more dangerous when the device isn’t charging. These products are known to explode while being carried in a pocket or while being held in the user’s hand. Occasionally, they explode while the user is vaping. Manufacturers even blame consumers for using non-original charging cables that could cause the batteries to overheat or short circuit.

Improper labeling is another problem. For example, many e-cigs include USB ports for charging, but standard inputs on computers can lead to e-cig fires. Although the industry claims that fires and explosions are rare, the resulting e-cigarette injuries are usually severe. In addition to causing property damage, these products can cause nicotine poisoning, burns, cuts, bruises, scarring and amputation. Explosions can injure the face, eyes, mouth, chest or hands.

Unfortunately, battery choices and quality checks are performed by cost-cutting manufacturers. Although vaping is now a $3.7 billion industry, manufacturers aren’t reinvesting enough of their profits to create safer devices and childproof containers that come with appropriate warnings.

As of May 2016, the FDA is regulating all tobacco products, including e-cigarettes. However, this new oversight has arrived too late for adults and children who have already been injured by these dangerous products.

If a family member has been injured by an e-cig or by e-liquid, contact our product liability attorneys today. We offer free consultations in a compassionate and helpful environment to determine whether you should file a personal injury claim for property damage, medical bills or other losses.