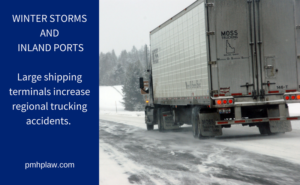 This winter, drivers in Georgia face new hazards besides slick roads and severe weather. Increased truck traffic to and from shipping terminals and inland ports will affect folks in Atlanta, Savannah, Chatsworth and Cordele. Whether you’re commuting to work or visiting your family during the holidays, watch out for heavy truck traffic that will make local highways and secondary roads more dangerous.

Other cities with large international cargo ports have experienced significant increases in truck traffic, accidents and delays. This effect has been documented in Houston, Chicago, Los Angeles, New York, New Jersey and other areas that have robust transportation systems. Even cities like Long Beach, California, which is home to the nation’s third largest port, are much larger and more developed than Savannah. The community isn’t prepared to become a regional transportation hub. Neither are cities like Chatsworth and Cordele, which have less than 10,000 residents.

Georgians who live along rail lines and interstate corridors should be worried about truck traffic. In one Chicago suburb, villagers banned tractor-trailers due to increasing accidents. Residents said that 8,000 tractor-trailers traveled through the town daily from ports in Chicago. When cargo arrives at seaports, 75 percent of shipments are hauled by tractor-trailers. Even if the goods are transported by rail, trucks almost always carry the cargo to its destination. Still, the Georgia Ports Authority claims that inland freight hubs will reduce truck traffic.

The Federal Highway Administration knows that increased truck traffic leads to more accidents. Nationally, truck drivers cause less than one-third of car-truck accidents. However, they cause half of these accidents near major ports. Because these collisions are generally severe, it takes more time to clear the road, so commuters have to deal with longer delays.

In Atlanta, the average driver spends 70 hours a year in traffic jams. The increased truck traffic related to inland ports will only make things worse, especially when drivers face severe weather. Despite pressures from grass roots groups, Georgians should expect increased truck traffic for the next decade as the government implements its statewide transportation initiative. Whether you’re traveling for work or pleasure this winter, protect yourself and your loved ones by practicing defensive driving. Give trucks extra room, and report unsafe operators to the Federal Motor Carrier Safety Administration.