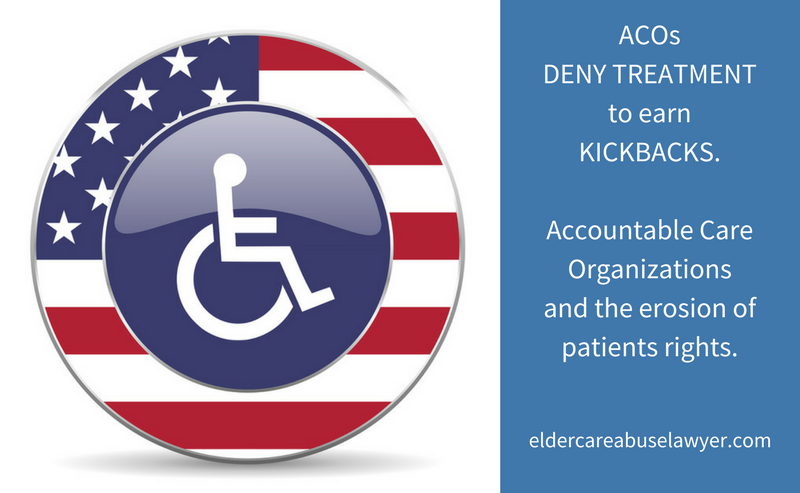 Fee-for-service billing systems and insurer-administrated HMOs are out, and accountable care organizations (ACOs) are on trend. This health care reform policy offers bonuses to doctors who have healthy patients. Unfortunately, health is measured by the number of appointments, hospital stays and tests that patients avoid. This incentive system encourages physicians to prevent patients from receiving noncritical treatments so that medical groups reap cash rewards.

Policymakers and health care experts have been buzzing with excitement since the Patient Protection and Affordable Care Act revealed the ACO framework in 2010. Since then, advocates have worried about the implications that affect a growing number of Americans. They say that in the current era of health care reform, patients must understand their rights and be aware of the tactics that doctors use to deny necessary services. Critics also worry that large ACOs will restrict patients’ ability to receive medical care from a dwindling number of outside providers.

In the beginning, most ACOs were overseen by the Center for Medicare and Medicaid Services. Now, private insurers represent a growing portion of the 900 ACOs that operate in the United States. More than 32 million Americans are ACO patients. According to projections, 105 million people will receive care through these organizations by 2020. Doctors must advise patients in writing that their practice is part of an ACO, but they don’t provide the information that patients need to make accurate decisions. Too many people do not understand how ACOs operate and how it affects the care they receive.

The tactics that doctors use to earn cost-saving bonuses are generally not in the best interests of patients. Instead, the system treats people like commodities. Health care publications provide elaborate strategies for preventing hospital readmissions known as rebounds. They explain ways that doctors can shield themselves from complaints and medical malpractice lawsuits while skimping on necessary diagnostic procedures that were overused during the fee-for-service era.

ACOs directly challenge fee-for-service payment schemes that encouraged doctors to order more tests and services to boost their profits and drive up the bills that Medicare and Medicaid pay. The excessive billing of unnecessary medical procedures created problems for patients and the government.

The high cost of fee-for-service systems encouraged the development of ACOs that promised to save the government $900 million in the first four years and $5 billion after eight years. In exchange for joining an ACO and stepping away from the fee-for-service model, doctors can share the savings. In addition to eliminating excessive procedures, ACOs could prevent patients from receiving necessary services.

Due to the ACO’s structure, medical conglomerates, including large health care groups in Atlanta, Athens and Savannah, have the best chance for earning savings-sharing bonuses because they can restrict patients’ health care access in each part of the system from the primary care office to the hospital.

Low-income and elderly Medicaid and Medicare patients face the greatest risks. Individuals who require extra care above the ACO’s target could put the company’s cash bonuses on the line. That’s when doctors might prevent patients from getting the treatments that they need.

Everyone has the right to access comprehensive medical services without experiencing discrimination or patient profiling. That was the goal of the Affordable Care Act, but the ACO payment scheme could put health care out of reach for the people who need it most.