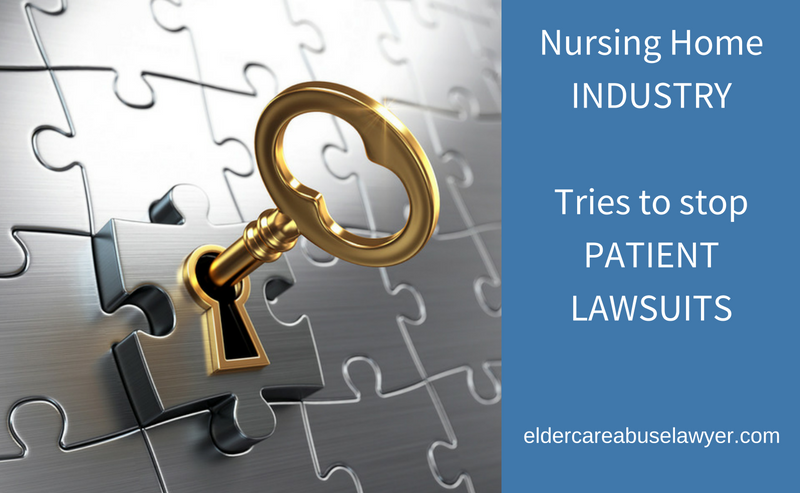 In September 2016, the government took a step forward by banning federally funded nursing homes from forcing residents to accept mandatory arbitration agreements. These clauses prevent patients and family members from filing lawsuits following nursing home neglect, elder abuse and severe crimes like rape and murder. However, the industry’s most powerful groups don’t want you to have the right to file a lawsuit, so they are suing the government.

Important Facts about the Lawsuit

Furthermore, the plaintiffs claimed that the ban would needlessly deprive residents and facilities of “the benefits of arbitration” while “siphoning resources toward litigation costs and away from resident care.”

What Binding Arbitration Means for You

Mandatory arbitration requires patients to settle complaints through alternative dispute resolution. Credit card companies and others businesses sneak these clauses into their customer agreements. However, there’s usually a way to avoid arbitration if you jump through a series of hoops before a certain deadline.

People who are familiar with the nursing home industry say that mandatory arbitration agreements are a thing of the past. They claim that most companies prefer voluntary arbitration. If that were true, why did the industry initiate a costly legal battle against the ban?

A 2009 study commissioned by the AHCA found that the average arbitration award was 35 percent lower compared to the results of litigation. On the other hand, leading arbitration attorneys say that the process actually costs companies more because they have to pay the arbitrator as much as $20,000 to make a judgment. Their motives are based partly on money and partly on preventing the negative publicity that lawsuits generate.

Nursing homes have experienced unfavorable court decisions because they don’t just use mandatory arbitration to save money. They use it to increase their profits. Many companies have instructed family members to sign decision-making documents when the patient did not lack the mental capacity. Nursing homes do this so that they can file a lawsuit to recover medical bills from family members if the patient couldn’t pay. Fortunately, these tactics have voided some agreements and allowed families to pursue justice in court.