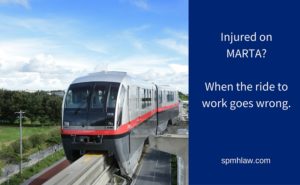 The Metropolitan Atlanta Rapid Transit Authority (MARTA) serves 1.6 million passengers each year. About 60 percent of passengers commute to work daily, and 70 percent of riders use both the train and bus to reach their destinations.

Although MARTA prides itself on transporting passengers safely, efficiently and dependably, a number of deadly accidents occur each year. While riding on Atlanta’s trains and buses, innocent passengers have had their lives changed in an instant. Public transportation accidents also affect motorists and pedestrians.

Causes of Bus and Train Accidents:

Each year, MARTA buses and mobility vehicles are involved in several fatal accidents and many more injury crashes. In the first half of 2016, the following bus accidents occurred.

In 2015, there was a high-profile accident involving an Atlanta bus and a CSX freight train in East Point. A portion of the bus was on the tracks when the train passed through the crossing. The bus spun from the initial blow and was hit again. The driver and five passengers sustained serious but non-fatal injuries.

That same year, a dozen passengers were injured when a MARTA driver ignored a stop sign, crossed the solid yellow lines and crashed into multiple vehicles. Recent verdicts for MARTA bus accidents have ranged from $250,000 for an injury claim to $4.1 million for a wrongful death lawsuit.

Between 1994 and 2006, there were four MARTA derailments. They were all caused by human error. Most recently, a train stalled near the Medical Center station. The train was moving between the platform and a rail crossover when the wheels ran off the tracks.

Several derailments and MARTA train accidents were caused by a lack of communication between drivers, workers and control center supervisors. These employees endangered passengers by failing to follow protocols during emergencies and routine maintenance. In 2000, two workers were fatally injured when an unscheduled train hit the self-propelled boom lift that they were using to repair the ceiling above the tracks in Lenox station. The families reached a $10.5 million settlement with MARTA.

The Effects of Train and Bus Accidents

Everyone has experienced delays and traffic jams caused by accidents. For some unsuspecting commuters, an accident can result in large hospital bills and permanent disabilities. If you’ve been injured in a MARTA accident, our attorneys can help you get the compensation that you need to resume your life. We will fight to help you reach a settlement that covers your medical bills, lost wages and more.